The Premier League and the gift that keeps on taking?

When most people leave their jobs, they can expect to receive some token of gratitude. Sometimes it is a personal gift that shows how well their colleagues knew them. Other times, leaving a job might mean a bottle of wine, shopping vouchers, or flowers, or at the grandest end, a gold watch. For Richard Scudamore, outgoing Chief Executive of the Premier League, the proposed leaving gift was of a rather different magnitude. Bruce Buck, Chelsea chairman encouraged all 20 top flight clubs chip in £250,000 cash to give to Scudamore.

The gesture was ratified on the 15th November. It had been thought that five clubs opposed the idea, including Wolves and Fulham. Fellow newly promoted side Cardiff were early to announce that they approved, on the basis that Scudamore “deserves the recognition”.

Across the media on the other hand, the tone of articles was almost universally negative. According to the Guardian, the gift shows that “football is no longer the people’s game”. Former sports minister Richard Caborn who worked closely with Scudamore, called the need for the gift “questionable”. Henry Winter, the chief football writer at The Times called the farewell “obscene….a PR disaster, 2 fingers to fleeced fans & a green light for agents to demand bigger wages for players & bigger fees for themselves”. The Daily Mail also used the word “obscene”. Ridicule followed disbelief. Online publisher Joe quipped that “for a small one-off fee of just £250,000 you can improve the life of Richard Scudamore. Please look into your heart and donate today”.

It is impossible to quantify how much of that growth is down to Scudamore’s negotiating nous, and how much another executive would have achieved in the same set of scenarios. What is certain is that Scudamore has steered the Premier League to a hugely strong position in a competitive national and global sports market, boosting revenues even in the last decade when English sides have been outperformed on the European stage by rivals from La Liga, the Bundesliga and Serie A. Inuring the competition to these performance related ebbs and flows, whilst maintaining TV rights at a substantially higher level than in rival leagues is some achievement. There is no better barometer for the impact of this than the fact that under Scudamore’s watch, a team battling relegation in the Premier League could earn more from broadcast rights than a League champion and Champions League finalist from the Bundesliga – as evinced by comparing the broadcast earnings of Sunderland and Bayern Munich in 2016.

In this context, even Scudamore’s reported total earnings of £26,343,000 during his 19 year tenure seem like good value. To a minority of commentators, the bonus, when viewed through this prism, is just reward for a hugely successful individual. To the vast majority, the bonus has provoked anger and disbelief.

Arguably, whether or not the £5m golden goodbye represents good value for money in the context of Scudamore’s achievements is beside the point. It is one thing for the media to take a dim view of the payoff, but fans too have been left decidedly cold. As SMS INC. RADAR can reveal, less than 1% of all comments sampled approved of the plan, whilst over 70% expressed strongly negative views. The overall response to the news was summarised in the revealing emoji cloud the story generated. 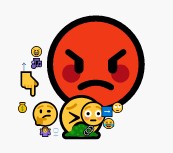 Reading through some of those fan comments, it becomes clear that in the current political and sporting context, the gesture looks tone deaf at best. As a statement of the Premier League’s priorities, the leaving gift is more ER than good PR.

In the age of austerity, a link not missed by the Daily Mirror who called the gesture “revolting”, the gesture has angered many fans. Several commentators pointed out that food bank collections remain a regular feature on matchdays, and suggested that for clubs to dole out £250,000 to an already hugely well remunerated executive is, in their words “insulting”, and, that refrain again, “obscene”.

On the sporting side too, several fans pointed out the irony of Scudamore receiving more in bonus than several sides’ transfer net spend.

As for the man at the centre of the headlines, it would be sad if the parting gift rather than the enormous body of work became his legacy. The overwhelming reaction risks making a highly successful man a pariah, and could lead to Scudamore himself feeling the pressure to reject the payout, or to donate at least a substantial portion of it to the grass-roots game.

The real danger for the Premier League is one of long-term engagement with fans. This kind of largesse at executive level, in the context of visible issues at grass-roots level risks alienating supporters.

The FA faced the same questions during the negotiations surrounding Shahid Khan’s now withdrawn offer to buy Wembley Stadium. Those discussions shone a spotlight on how resources should be allocated across the spectrum of footballing priorities, from grass roots facilities to elite performance. Now the furore surrounding Scudamore risks making Premier League Clubs, and by default the Premier League itself, the unpopular face of the same debate. Notwithstanding any commercial justification of the gift, and even though the suggestion arose from Bruce Buck, chairman of Chelsea FC rather than the Premier League directly, the PR impact on the wider brand could be devastating. How such comments translate to spending is hard to predict, but it is worrying that many of the negative reactions on social media invoked calls to boycott club merchandise, or even ticket sales.

Scudamore’s legacy should be one of strengthening the English game and planting the seeds for ongoing success under his successor, Susannah Dinnage. Instead, the ex-global president of the Animal Planet channel risks the start of her leadership being undermined by Scudamore’s departure. To overcome this, clear leadership will be needed by the Premier League and its clubs in tackling some of the issues at the coal face of the sport – ticket prices and grass roots investment in particular.

The Premier League will no doubt be keen to publicise and perhaps even expand its work in grass-roots and its support for public facilities. Ultimately Scudamore’s great success was in convincing broadcasters of the value of the Premier League in part because of the number of fans who can be relied on to tune in week in, week out. It would be a sad irony if his ultimate legacy was the distancing of the Premier League from those same fans.

SPORTS MARKETING SURVEYS INC. is a full-service market research agency, operating a range of qualitative and quantitative research in the sports and leisure industry. SMS INC. Radar is a social monitoring tool that forms part of its research offering.

To learn more about how SPORTS MARKETING SURVEYS INC. can support your business, please get in touch at ed.willis@sportsmarketingsurveysinc.com