Compared to the same period in 2017, rounds played were significantly lower for Quarter 1 across all regions, leading to an average drop of over 22%. With a decrease of 15.7% Scotland was the territory least affected, with the North being the worst hit and losing a third of rounds compared to last year. 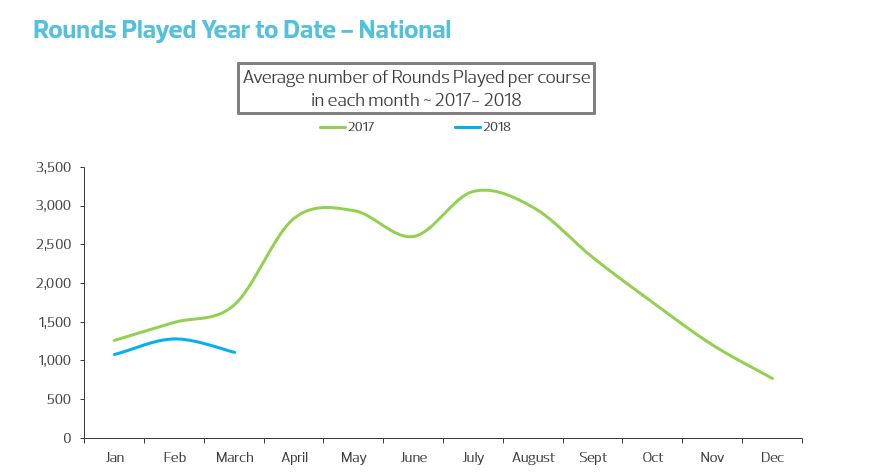 Q1 2017 had experienced a relatively strong period for rounds played with the highest average recorded since 2012 so perhaps it should come as no surprise that without unseasonably good conditions, Q1 2018 would see a decline year on year. However, very few could have anticipated the arrival of the two-part “Beast from the East” and the disruption, some may say destruction, that it wreaked on golf courses throughout the country. In total, rounds played in March were 35% down compared to 2017.

SMS INC. director Richard Payne is determined to remain positive for 2018, commenting: “There are certain points in life where you come up against the perfect storm and it just so happens that, as an outside sport, golf’s storms share their names with meteorological ones, with Eleanor disrupting the start of the year and The Beast making golf virtually unplayable in March.

That said, Q1 typically accounts for between 15-20% of annual rounds played, meaning that there is a lot of golf still to be played. Following an exciting Masters, the revival of Tiger Woods and the Ryder Cup back in Europe in September, as an industry we need to dust ourselves off and focus on the positives that the year still has to offer – let’s just keep our fingers crossed that the sun gives us a helping hand too.”